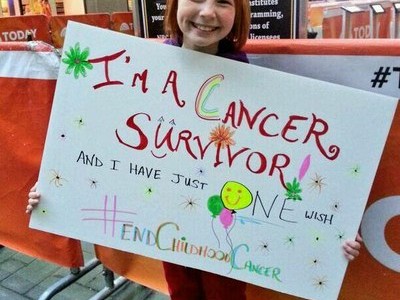 On August 27, 2010, Ashley Burnette, from Raleigh, North Carolina, was diagnosed with stage IV Neuroblastoma. Later, she developed evidence of PTLD, which stands for, Post-Transplant Lymphoproliferative Disorder. The cancer took a heavy toll on Ashley and her family.
The Good News Notebook Magazine is  exploring: What was the journey she took to beat two forms of cancer? And, how did Ashley’s experience of surviving two cancers inspire her to work with Hyundai Hope on Wheels?

Ashley was diagnosed with Neuroblastoma, which is a cancer that comes in many forms, but all forms have one similarity, it usually affects only children five years or under. Ashley is an exception to the five years or under rule, however. She was diagnosed at seven years old. The cancer developed through her immature nerve cells. The treatments began to take a toll on her body and her family. During her 150 nights in her hospital room, she experienced: seven week long rounds of chemotherapy, thirteen surgical procedures, a stem cell transplant, twelve days of external beam radiation, two rounds of MIBG therapy, five weeks in Pediatric ICU for antibodies infusions, numerous ER visits, over fifty blood and platelet transfusions, over hundred and fifty nights at the hospital and an infinite number of pokes. Ashley visited multiple surgeries to rid the cancer. Sadly, during the process Ashley developed a second cancer called, Non-Hodgkin’s Lymphoma. Her family visited eight different hospitals in five different states. In August 2012, after body scans where conducted, Ashley received the amazing news that all of her cancer was gone.

During the treatments, Ashley was approached and asked if she wanted to be a Patient Ambassador for the NC Children’s Hospital. She now speaks as a national youth ambassador for Hyundai Hope on Wheels. She travels across the United States to spread awareness for cancer. Ashley stated, “I mean, they are going through a lot right now.” Ashley Burnette is an excellent example of being in a difficult situation and turning what could turned out to be a highly negative experience, into an inspiring story. Hyundai Hope on Wheels is a nonprofit organization that raises money for childhood cancer awareness. Since Hyundai Hope On Wheels’ inception in 1998, they would have funded over $100 million dollars, by the end of 2015, for pediatric cancer research.

The Good News Notebook Magazine hopes Ashley’s story inspires other people with different forms of cancer to have the strength to see their way to the end of the tunnel.

Our Adventures with Ashley. Retrieved September 29, 2015 from: http://ashleyburnette.com/