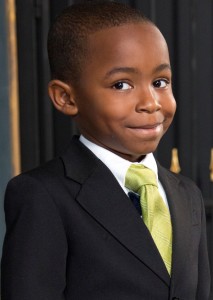 Recently, the GoodNewsNotebook.com (GNN) heard of a 9-year old biblical prodigy who is really preaching the Good News.  His name is Samuel Green.  In our interview with young Samuel, we were even more impressed with his achievements.  Here’s why.

On July 6, 2005 in Jackson, Mississippi God blessed the world with Mr. Samuel M. Green. He is 9 years old and handsome son to Louis & Joann Green. Samuel spends time with his older brother Cedric that he loves dearly. Samuel is an active member at Berean Seventh-Day Adventist Church in Jackson, MS which is led by Pastor James Owens.

Samuel is in the 5th grader at College Drive Seventh-Day Adventist Christian School in Pearl, MS. At an early age, Samuel has shown his love and passion for God. Often, you will find him reading his favorite bible story, singing his favorite song, or just lending a helping hand.

We, at GNN, were also excited to learn the Samuel host his on television show, “Samuel Green presents the Simple Truth.” The TV show airs each Sunday on cable channel 18 in Jackson, MS. The show has had great audience appeal and is professional filmed by Phyllis Robinson Productions.

Samuel presents God’s words with clarity and understanding.  Clearly, age is a number with God as he simply tells you, “what thus says the Lord.”  His messages are powerful bible stories that tell how our Lord has our back.  A principle that many young Christian students can understand and hold on to as they face the challenges of school, peer pressure, and even, family life.

In October of 2011. Samuel and his parents traveled to West Frankfort, IL where he delivered his sermon about “Jonah” for divine service that was broadcasted worldwide on 3ABN’s “Kid’s sharing” ministering to millions. Recently in March of 2012, Samuel was featured on Jackson, Mississippi’s NBC affiliate WLBT 3 weekly segment “Look around Mississippi and Fox 40 morning show twice. Fox 6 Birmingham, Al. His most recent appearance was on CCN show entitled “Faces of Faith, He has been featured on NBC Today’s show and was interview by Kathy Lee Gilford and Hoda Kotb.

You can also view Samuel’s messages and even, request a media appearance on his website at www.SamuelMGreen.com.